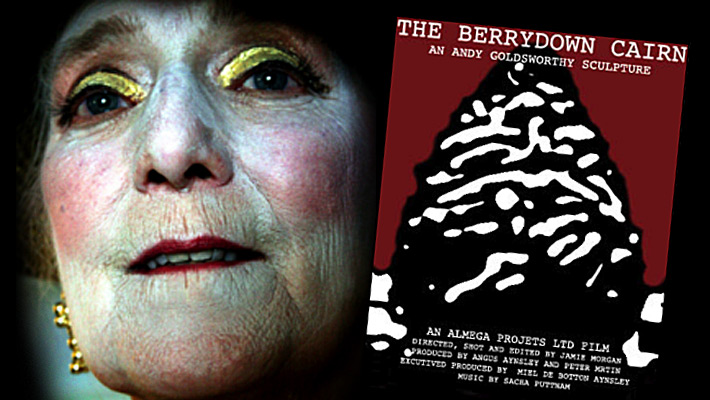 On an isolated winter coast Isabelle creates a darkly magical ritual to say goodbye to a house and landscape she is inextricably linked to.

Directed by the award winning filmmaker Flora Skivington, whose work has been shown in film theatres and public spaces in the UK, Europe and the United States. Her film A New Way to Fly won the Kodak Film Award.

The film was shot by critically acclaimed USA cinematographer Peter Strietmann, who has worked extensively with the artist Matthew Barney (THE CREMASTER CYCLE, DRAWING RESTRAINT). OSCAR AND ISABELLE was the first drama in Europe to be shot with the ARRI D-20 film style digital HD camera, only officially available at the start of 2006.

At the HDfest, 2007, OSCAR AND ISABELLE won the Deffie Award for Best Cinematography in an HD short and was nominated for Best Dramatic HD Short and Best Screenplay.

Written and Directed by:

The film follows acclaimed English sculptor Andy Goldsworthy in the creation of THE BERRYDOWN CAIRN in 2006, his fourth large oak sculpture. The construction of this gigantic and “guardian-like” piece of natural art spans the course of four days through to completion.

Andy Goldsworthy is an English artist and photographer renowned for his site-specific sculpture and land art. For most of his career he has created works in the open air, in locations as diverse as the Lake District, the North Pole or the Australian Outback.  His mediums often include twigs, thorns, stones, mud, flowers, pinecones, icicles, snow and leaves, and he frequently uses his hands and teeth, along with found tools, to arrange his materials. He was featured in the award-winning documentary Rivers and Tides (2001).

‘The Berrydown Cairn’ was an official selection at the Festival Dei Popoli in Italy 2006.